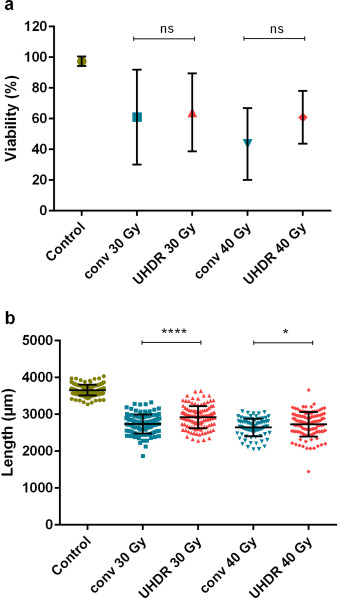 PURPOSE. Recently, ultra-high dose rate radiotherapy (UHDR-RT) has emerged as a promising strategy to increase the benefit/risk ratio of external radiotherapy. Extensive work is on the way to characterize the physical and biological parameters that control the so-called "Flash" effect. However, this healthy/tumor differential effect is observable in in vivo models, which thereby drastically limits the amount of work that is achievable in a timely manner. METHODS AND MATERIALS. In this study, zebrafish embryos were used to compare the effect of UHDR irradiation (8-9 kGy/s) to conventional dose rate (0.2 Gy/s) with a 68 MeV proton beam. Viability, body length, spine curvature and pericardial edema were measured 4 days post-irradiation. RESULTS. We show that body length is significantly greater after UHDR-RT compared to conv-RT, by 180 µm at 30 Gy and 90 µm at 40 Gy, while pericardial edema is only reduced at 30 Gy. No differences were obtained in terms of survival or spine curvature. CONCLUSIONS. Zebrafish embryo length appears as a robust endpoint and we anticipate that this model will substantially fasten the study of UHDR proton beam parameters necessary for "Flash".

The full potential of radiotherapy (RT) is currently limited by the dose absorbed by healthy tissues1. Recently, a benefit of ultra-high dose rate irradiation with electron beams (UHDR-RT, >40 Gy/s), known as "Flash", has been reported2. UHDR-RT induced less lung fibrosis in mice compared to conventional dose rate-RT (conv-RT), while preserving the anti-tumor efficacy. Several studies have confirmed a protective effect of UHDR-RT in various animal models, tissues and particles3. Combining the conformal precision of protons with UHDR irradiation appears as a promising strategy to further reduce the toxicity of radiotherapy. In this respect, there is a strong methodological need to define the most favorable irradiation settings for "Flash".
The zebrafish embryo represents an appropriate model to study radiobiological effects such as viability and morphological malformations4. Using UHDR electron beams, protection on zebrafish embryo length has been reported 5,6. However, it is unclear whether proton beams behave similarly7. In this study, we assessed the biological response of zebrafish embryos in terms of survival, body length, spine curvature and pericardial edema after 8-9 kGy/s 68 MeV proton RT.

Sixty-eight MeV protons were produced by an isochronous cyclotron (IBA Cyclone 70XP)8. A home-made pulsing chopper-based system allowed macro-pulses of controlled duration (>10 μs), frequency and intensity9. This enabled conventional mean dose rates of 0.2 Gy/s up to UHDR of 9.2 kGy/s in identical conditions. Further details are given in supplementary data and Figure S1, including online and film dosimetry10. Beam structures and doses are given in supplementary Tables S1 and S2.

Wildtype zebrafish (Danio rerio) embryos deletion were cultured in E3 medium at 28°C in a humidified incubator (Memmert IN75, Schabach, Germany). One hour prior to irradiation, 32 eggs in 100 µl of E3 medium were placed in closed 0.7 ml eppendorf tubes, pre-filled with 0.5 mL solidified ultra-pure agarose at 2 % (Invitrogen, Carlsbad, USA) (Figure S2, S4A). At 28 hpf, 30 and 40 Gy were delivered at 0.2-0.25 Gy/s (conv-RT) and 8.2-9.2 kGy/s (UDHR-RT) (Tables S1 and S2). Two tubes were prepared for each condition and were irradiated with a homogeneous beam of 10 mm in diameter. Three experiments were performed with strictly independent dates, egg batches, setup and machine operation, except for Figure 3 (2 replicates the same day). Viability rate (heartbeat) was assessed at 4 days post-fertilization (dpf) relatively to the number of surviving embryos 1 h after irradiation. Pericardial edema was scored in living embryos according to previous report4. At 5 dpf, embryos were fixed for 24 h with 4 % formol and photographed with a Ni-U stand and 2X objective with 0.06 numerical aperture (Nikon Instruments, Melville, USA). The length (a) of embryos was measured along the vertebral column using Fiji software (ImageJ 1.53q). The distance (b) was measured by a straight line from the tip of the head to the end of the tail. Spine curvature represents the a/b ratio.

Statistical analysis was performed using GraphPad Prism (V6). Kruskall-Wallis test followed by Dunn's correction was used for the mean of the survival rates. The mean values for the length, curvature and pericardial edema were compared with a One-way ANOVA test followed by Bonferroni correction. Data represent the compilation of n=55-187 ± sd. *: p<0.05; **: p<0.01; ***: p<0.001; ****: p<0.0001.

In preliminary experiments, the dose response of 4 and 28 hpf embryos was established to select the best conditions where RT affects development with little effect on viability (Figure S3). Next, we tested whether irradiation dose rate influences zebrafish development. Viability of non-irradiated embryos was close to 100 % (Figure 1A). In contrast, irradiation led to decreased viability in all conditions, with no statistical difference between conv-RT and UHDR-RT either at 30 Gy (64 % 25 vs 61 % 31) or at 40 Gy (44% 23 vs 61% 17). Next, body length of the embryos was assessed. A significant difference of 180 µm was observed between UHDR-RT (2920 µm300) and conv-RT (2740 µm 260) at 30 Gy (p<0.0001). To a lesser extent, zebrafish embryos irradiated at 40 Gy with UHDR-RT were also 90 µm longer (2730 µm330) than with conventional dose-rate (2640 µm240) (p<0.05) (Figure 1B). The non-irradiated group exhibited the expected length of embryos at the early larval stage (3660 µm140). Based on the body length reduction, toxicity after UHDR-RT was diminished by 20 % at 30 Gy and 9 % at 40 Gy. Notably, embryos irradiated at 40 Gy with UHDR-RT were as long as those irradiated with conv-RT at only 30 Gy. Interestingly, these observations are strongly dependent on the irradiation set-up, since a larger medium volume yielded negative results (Figures S4-5).
To further assess morphological malformations, spine curvature and pericardial edema were investigated7. No curvature difference was observed between the UHDR-RT and conv-RT groups (Figure 2A). No edema was observed for the control group (score=1) (Figure 2B). Interestingly, a significant reduction was observed at 30 Gy UHDR-RT (Score=3.0) compared to conv-RT (Score=3.50), although not at 40 Gy.
Lastly, we investigated the influence of RT dose rate. Embryo length after 30 Gy RT was used as the most robust endpoint. Consistently with the precedent results, the highest dose rate (7700 Gy/s) led to 23% toxicity reduction compared to conv 0.2 Gy/s RT (Figure 3). A trend was observed for groups above 500 Gy/s although significance was not reached due to the low statistical power with repeated column comparison.

The zebrafish embryo enables fast and quantifiable assessment of biological effects of irradiation beams with high statistical power4,11. In the present work, we investigated the effect of UHDR proton-RT on pharyngulal stage 28 hpf zebrafish embryos. The radioresistance at 30 and 40 Gy was in agreement with a previous report12. A singular observation had initially reported the sparing of zebrafish embryo length using UHDR electron-RT at an earlier stage (4 hpf) and lower (12 Gy) dose5. Subsequently, an independent publication investigated zebrafish toxicity after UHDR proton-RT, but hardly found conclusive results 7. However, very recent work by the same group indicates that reduction of zebrafish toxicity with UHDR proton beams appears accessible13. In the present study, UHDR proton irradiation protected the length of the embryos. Pericardial edema was also reduced at 30 Gy. This is consistent with the publication by Karsch et al. that obtained protection with 30 Gy (300 Gy/s, 224 MeV) at 24 hpf but not with higher doses13,14. Collectively, these findings validate the use of the zebrafish model to study the biological effects of UHDR proton beams with varying energy or structure.
Other investigations used a 105 Gy/s electron beam. Embryos irradiated at UHDR showed significant improvement in length and spinal curvature, and these effects were strengthened by reducing the pO26. Of note, the setup used here involves placing the embryos within a limited volume of medium and air. The fundamental role of oxygen level in response to UHDR-protontherapy appears as an interesting parameter in the prospect of future investigations.

The present work validates the applicability of the zebrafish embryo length as a robust model for studying the toxicity of ultra-high dose rate proton radiotherapy. This model provides a fast and reproducible readout that will further accelerate the establishment of the physical (beam structure) and radiochemical (oxygen involvement) parameters allowing to achieve the "Flash"-mediated protection of healthy tissues.

All the data are presented in the article and its supplemental materials. Specific requests can be addressed to the corresponding author.

© 2022 The Authors. Published by Elsevier Inc. on behalf of American Society for Radiation Oncology.