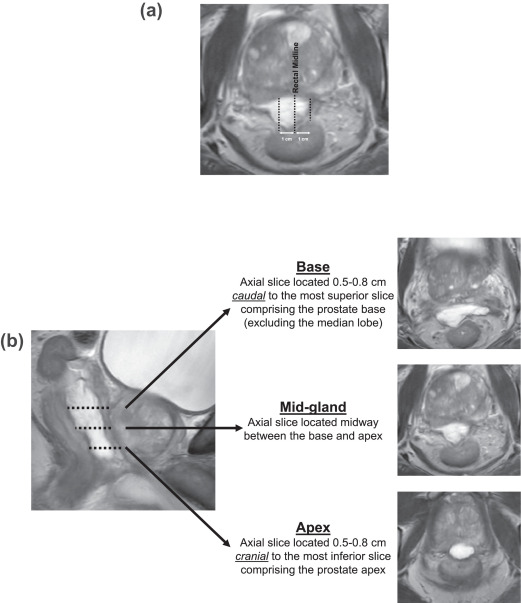 : A quality metric consisting of prostate-rectal interspace (PRI) measurements from axial T2-weighted MRI simulation images was applied to 42 men enrolled on a multi-institutional phase II study using HSP with prostate SBRT (45 Gy in 5 fractions). A score of 0, 1, or 2 was assigned to a PRI measurement of <0.3 cm, 0.3-0.9 cm, or ≥1 cm, respectively. An overall spacer quality score (SQS) was computed from individual scores at rectal midline and ±1 cm laterally, located at the prostate base, mid-gland, and apex. Associations of SQS with rectal dosimetry and late toxicity were evaluated.

: We developed a reliable and informative metric for assessing HSP, which appears to be associated with rectal dosimetry and late rectal toxicity after prostate SBRT.

Given the anatomic proximity of the prostate to normal tissues such as the rectum, acute and late toxicities are possible with prostate cancer external beam or brachytherapy treatments. One such strategy to minimize toxicity is the insertion of a commercially supplied polyethylene glycol (PEG) hydrogel rectal spacer, a polymerization solution injected transperineally under ultrasound-guidance to temporarily distance the rectum away from the prostate gland. This rectal spacer remains intact throughout a typical course of radiotherapy and is hydrolyzed 3-6 months after placement. The first prospective randomized clinical trial to evaluate the impact of the hydrogel rectal spacer in prostate cancer patients treated with conventionally-fractionated external beam radiotherapy (EBRT) established its ability to increase the mean prostate-rectal separation by 1 cm; this translated into a lower rectal dose and reduced incidence of late grade 1-2 rectal toxicity [1, 2]. A systematic review and meta-analysis of 7 studies comparing over 1000 prostate cancer patients treated with dose-escalated EBRT and/or brachytherapy with or without hydrogel rectal spacer placement (HSP) reported a 66% V70 rectal dose reduction with a corresponding decline in acute (RR 0.72) and late (RR 0.38) grade 1 and higher rectal toxicity, as well as superior patient-reported >3 month bowel quality of life in the presence of the spacer hydrogel [3].
Attempts have been made to characterize the quality of HSP in order to accurately assess its true dosimetric- and toxicity-reduction impact given the variability of reported benefit across individual studies. However, these published HSP quality metrics [4-6] have not been universally adopted, as they are somewhat cumbersome to use and were not consistently evaluated for their utility in predicting late rectal toxicity. A secondary analysis of HSP quality in the pivotal phase III spacer trial demonstrated that 49% of patients had symmetric hydrogel rectal spacers in all three axial slices analyzed, with a correlation between inferior composite symmetry scores and smaller rectal dose reduction relative to the pre-spacer plan [4]. Although informative, this metric does not assess the actual thickness of the prostate-rectal interspace (PRI) created by the spacer gel, which is more relevant to rectal dosimetry.
Since clinical observations have suggested the spacer's ability to reduce rectal dose is dependent on the quality of the implant, a universally adopted practical metric is needed. We therefore created a HSP quality metric that quantitatively characterizes the adequacy of the PRI at the prostate base, mid-gland, and apex, which also has the benefit of showing association with reductions in rectal dosimetry and late toxicity in men treated with prostate stereotactic body radiotherapy (SBRT).

As previously described [7], all patients had a 10 cc polyethylene hydrogel spacer (SpaceOAR System, Boston Scientific, Inc., Bedford, MA) introduced transperineally into the perirectal space between Denonvilliers’ fascia and the anterior rectal wall under ultrasound guidance approximately 1–2 weeks prior to their MRI simulation session. Using the T2-weighted axial slices from the MRI simulation, the interspace between the posterior aspect of the prostate gland and the anterior rectal wall was measured in the anterior-posterior orientation parallel to anatomic midline. This total prostate-rectal interspace (PRI) thickness consisted of natural tissue space (i.e., fat, soft tissue, and/or neurovasculature if present) and the implanted hydrogel rectal spacer (which is hyperintense on T2-weighted images). Measurements were made at rectal midline (along the left-right direction), as well as 1 cm to the right and left, as demonstrated in Figure 1a; note, rectal midline did not necessarily correspond to the middle of the prostate gland (along the left-right direction). To obtain a representation of the PRI throughout the length of the prostate gland, measurements were made at the “base” (axial slice located 0.5–0.8 cm caudal to the most superior slice comprising the prostate base, excluding the median lobe within the bladder), “mid-gland” (axial slice located midway between the prostate “base” and ”apex”), and “apex” (axial slice located 0.5–0.8 cm cranial to the most inferior slice comprising the prostate apex), as illustrated in Figure 1b. Because of the occasional tortuous shape of the rectum, rectal midline was sometimes in a different location at the base, mid-gland, or apex slice.
PRI measurements (rounded to one decimal place) were assigned a value between 0-2 and entered into a 3 × 3 table. These numerical categories were defined as follows: a value of “0” for PRI measurements <0.3 cm, “1” for PRI measurements between 0.3–0.9 cm, and “2” for PRI measurements ≥1.0 cm (Figure 2). (Figure 2. A cut-off of 0.3 cm was chosen because this is a typical minimum planning target volume (PTV) posterior expansion for prostate SBRT treatments; a PRI of less than 0.3 cm would therefore result in overlap of the PTV with the rectum. A minimum threshold of 1.0 cm was used to define PRI category “2” because publications [3] have reported this value as the approximate mean perirectal space created by the hydrogel rectal spacer, and thus should be achievable with an optimal implant. The scores within the 3 × 3 table easily provide a synopsis of PRI symmetry along the left-right axis; adequacy of separation between the prostate and rectum at the base, mid-gland, and apex; and deficiencies of HSP whether there are areas that the hydrogel rectal spacer could have been implanted to increase prostate-rectal separation.
We then created a hydrogel rectal spacer quality metric score for each patient, using the following rules (Figure 3):

The association between this SQS and late rectal toxicity was retrospectively evaluated in 42 men with low (11.6%) or intermediate (88.4%) risk prostate cancer enrolled on a multi-institutional phase II study using HSP with prostate SBRT to assess toxicity and tumor control[8]. One of the patients included in Folkert, et al's, original paper[8] was ineligible for this secondary analysis study due to the absence of follow-up data; our study cohort of 42 men had a median follow-up of 48 months. Patients had prostate glands ≤80 cc (2 patients had prior cytoreduction with bicalutamide), baseline American Urological Association Symptom Index (AUA-SI) score ≤18, no prior transurethral resection (TURP) or cryotherapy of the prostate, and no history of inflammatory bowel disease (IBD). Greater than 95% of the PTV (a 0.3 cm isocentric expansion of the contoured prostate gland) received a total dose of 45 Gy over 5 fractions, delivered in 2–3 fractions per week on non-consecutive days; concurrent or adjuvant ADT was not allowed. Physician-reported late rectal toxicity (National Cancer Institute Common Toxicity Criteria for Adverse Events, NCI-CTCAE v4.0) was assessed up to 60 months, and the presence of rectal wall ulcers on anoscopies or sigmoidoscopies were assessed serially through 9 months post-SBRT. We then applied the SQS to all patients’ HSP by measuring the PRI on the MRI simulation scans.

Using standard procedures, we calculated descriptive statistics, including median and ranges for continuous parameters, as well as percentages and frequencies for categorical variables. Differences in various baseline factors (including dosimetry and late rectal toxicity) between SQS groups were evaluated using Kruskal-Wallis tests for continuous factors and Fisher's exact tests for categorical factors. Simple linear regression modeling was performed to assess associations between rectal dosimetric measures and the SQS. Univariable logistic regression was employed to evaluate the association between late rectal toxicity and the independent variable, SQS. The SQS was analyzed as a three-level variable (0 is worst, 2 is best). Coefficients of determination (R2) were computed for each model. To evaluate the predictive power of the SQS, we generated a univariable (UVA) logistic model for each score under consideration: SQS with three levels (0, 1, and 2), SQS dichotomized as 0-1 versus 2, and SQS dichotomized as 0 versus 1-2. We computed Nagelkerke's adjusted pseudo R-square values to assess model fit, and qualitatively compared them between models. All statistical computations were performed and generated using SAS Software Version 9.4 (The SAS Institute, Cary, NC).

Among the 42 men whose hydrogel spacer implants were evaluated in this study, 35 (83%) and 7 (17%) were enrolled by the University of Texas Southwestern Medical Center (UTSW) and Memorial Sloan Kettering Cancer Center (MSKCC), respectively. As reported in Table 1, among these patients who were treated to 45 Gy with SBRT in 5 fractions, the median and mean maximum dose to 1 cc of rectum (rectal D1cc) was 3337.5 (range, 1473.4-4620.0) and 3369.8 (SD, 782.8) cGy, respectively. The mean volume of rectum receiving 100% of the prescription dose (V45 Gy) was 0.2 (SD, 0.4) cc. Over a median follow-up of 48 months, 20 men (48%) developed a late rectal toxicity, consisting of 14 and 6 patients with grade 1 and 2 as the highest reported late rectal toxicities, respectively; there were no grade 3 or higher late rectal toxicities.
Table 1Rectal dosimetry and late rectal toxicity
Abbreviations: SD = Standard Deviation, Rectal Dmax = maximum rectal point dose (cGy), Rectal D”X”cc = maximum dose (cGy) to X cc of rectum, and Rectal V”X”Gy = volume (cc) of rectum receiving at least “X” Gy.

As Table 2 shows, all patients had at least 0.3 cm of space between the prostate and rectum at the level of the prostate mid-gland (i.e., PRI mid-gland summary score of 1-2). The majority of men had a PRI summary score of 2 at the base (74%), mid-gland (83%), and apex (64%). When a composite score consisting of individual PRI summary scores from the base, mid-gland, and apex was computed (defined as the SQS), 7 (17%), 17 (40%), and 18 (43%) men in this cohort had scores of 0, 1, and 2, respectively.
Table 2Prostate-Rectal Interspace Scores and Overall Spacer Quality Score
Abbreviations: Prostate-Rectal Interspace Score = PRI, Overall Spacer Quality Score = SQS, and SD = Standard Deviation.

Associations between SQS and rectal dosimetric and late toxicity outcomes

We have developed a metric to report on the overall quality of PRI created by HSP, that is significantly associated with rectal dosimetry and late rectal toxicity. This SQS will need to be validated using an external dataset with a larger and more diverse patient cohort to corroborate its utility.

This is a secondary analysis of data originally collected under an Institutional Review Board-approved prospective study. Data remained de-identified and compliant with the Health Insurance Portability and Accountability Act.

Data Availability Statement for this Work

Research data from this work are stored in an institutional repository and will be shared upon request to the corresponding author.

The authors have no relevant financial disclosures to report. Drs. Folkert and Zelefsky are consultants for Boston Scientific Inc.

© 2022 Published by Elsevier Inc. on behalf of American Society for Radiation Oncology.