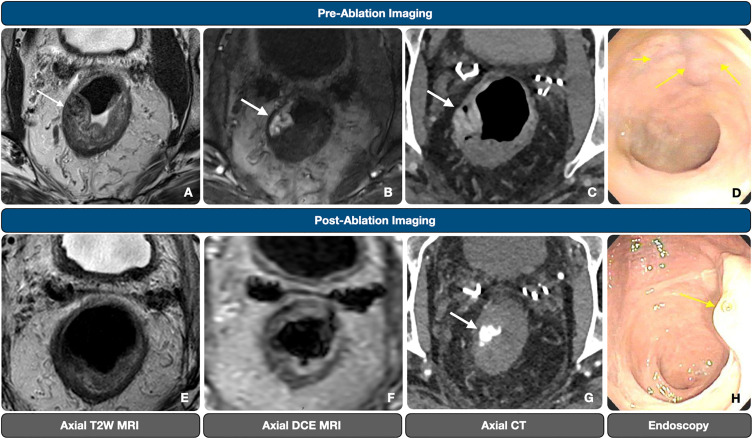 Postprostatectomy Radiation Therapy in the Setting of a Rectal Vascular Malformation

External beam radiation therapy (EBRT) is a potentially curative management option for patients with prostate cancer that recurs after prostatectomy. Although generally well-tolerated, the risk of moderate-to-severe rectal bleeding is an important consideration in defining the therapeutic index for a potential course of pelvic radiation therapy (RT). Historically, rectal bleeding has been considered a well-documented side effect of EBRT for prostate cancer, both in the intact
1
Quality of life and satisfaction with outcome among prostate-cancer survivors.
N Engl J Med. 2008; 358: 1250-1261
and postoperative
2
Toxicity associated with postoperative radiation therapy for prostate cancer.
Am J Clin Oncol. 2011; 34: 611-618
settings. For example, in the SWOG 8794 study, the rate of rectal bleeding in the adjuvant, postoperative group was 3.3% versus 0% in the observation group.
3
Adjuvant radiotherapy for pathologically advanced prostate cancer: A randomized clinical trial.
JAMA. 2006; 296: 2329-2335
Risk factors, such as prior history of irritable bowel disease,
4
Acute and late toxicity of patients with inflammatory bowel disease undergoing irradiation for abdominal and pelvic neoplasms.
Int J Radiat Oncol Biol Phys. 2000; 46: 995-998
prior abdominopelvic surgery,
5
Increasing the risk of late rectal bleeding after high-dose radiotherapy for prostate cancer: The case of previous abdominal surgery. Results from a prospective trial.
Radiother Oncol. 2012; 103: 252-255
and higher radiation dose,
6
Effect of standard vs dose-escalated radiation therapy for patients with intermediate-risk prostate cancer.
JAMA Oncol. 2018; 4e180039
have been associated with higher risks of rectal toxicity, including bleeding.
Contemporary techniques of EBRT, including intensity modulated RT, appear to mitigate a significant portion of the cumulative burden of rectal toxicity observed in prior eras.
2
Toxicity associated with postoperative radiation therapy for prostate cancer.
Am J Clin Oncol. 2011; 34: 611-618
,
7
Comparative effectiveness research in localized prostate cancer: A 10-year follow-up cohort study.
Int J Radiat Oncol Biol Phys. 2021; 110: 718-726
Although radiation is known to cause rectal injury, only a subset of symptoms typically attributed to radiation toxicity are, in fact, a result of endoscopically diagnosed radiation proctitis. In one prospective study, of 141 patients who were observed to have rectal bleeding after RT, approximately half were found to have other findings in addition to radiation proctitis, which may have been causally implicated in rectal bleeding.
8
The significance of rectal bleeding after pelvic radiotherapy.
Aliment Pharmacol Ther. 2005; 21: 1085-1090
Whether pre-existing colorectal vascular abnormalities increase the risk of moderate-to-severe rectal bleeding after a definitive course of postprostatectomy RT is uncertain. Vascular malformations and anorectal varices are uncommon entities that present an independent risk of spontaneous bleeding, which can present as recurrent bleeding events or sudden onset, life-threatening bleeding. The rate of spontaneous bleeding in rectal varices is estimated to be between 0.45% and 3.6%.
9
Massive bleeding from hemorrhoidal varices in portal hypertension.
JAMA. 1980; 244: 2084-2085
,
10
Rectal varices are not piles.
Br J Surg. 1984; 71: 163
,
11
Massive lower gastrointestinal bleeding from intestinal varices.
Arch Surg. 1979; 114: 1158-1161
Thus, the safety of pelvic RT in the setting of anorectal vascular malformation or anorectal varices is uncertain. We present a case of biochemically recurrent prostate cancer in a patient with a rectal vascular malformation in whom postprostatectomy RT was indicated with a discussion of the resultant management considerations.

A 70-year-old Caucasian man with a past medical history significant for internal hemorrhoids presented with unfavorable intermediate-risk prostatic adenocarcinoma (cT1c N0 M0, Gleason score 3 + 4 = 7 [9 of 12 systematic cores, 10 of 10 targeted cores], prostate-specific antigen [PSA] level = 9.4 ng/mL). Multiparametric magnetic resonance imaging (MRI) with an endorectal coil was performed during staging evaluation, and revealed 5 suspicious intraprostatic lesions and no abnormalities of the rectum. The patient underwent an uncomplicated robotic assisted radical prostatectomy with obturator lymph node dissection, revealing a single focus of pT2 N0 (R0) Gleason score 3 + 4 = 7 adenocarcinoma involving 40% of the gland bilaterally. The lymphadenectomy specimen revealed 0 of 10 lymph nodes involved with metastatic disease. His postoperative PSA level was undetectable (< 0.02 ng/mL) at the 3-month postoperative follow-up timepoint.
At the 8-month postoperative timepoint, the patient was noted to have a detectable PSA level (0.1 ng/mL) that was confirmed on a second measurement. A restaging evaluation included a multiparametric MRI of the prostate bed with a phased array surface coil, computed tomography (CT) imaging of the chest, abdomen, and pelvis with contrast, and gallium 68 prostate-specific membrane antigen R2 positron emission tomography/CT imaging to investigate for evidence of gross locoregional recurrence. Although MRI did not reveal evidence of residual or recurrent disease, a vascular malformation was visualized in the right rectal wall, 4 cm from the anal verge (Fig. 1A).
In retrospect, this abnormality had likely been compressed and obscured by the endorectal coil during the presurgical staging MRI procedure and not noted at the time of surgical resection. The CT scans corroborated these findings, and additionally detected a component of this vascular malformation that extended to the anterior rectal wall (Fig. 1B). There was no evidence of locoregional recurrence on the positron emission tomography/CT scan. A lower endoscopy was performed to further characterize the lesion, and the results demonstrated the previously described internal hemorrhoids. In addition, a submucosal vascular malformation, which was compressible with insufflation, was visualized and deemed consistent with an arteriovenous malformation (AVM) or a rectal varix (Fig. 1C).
Based on the concern for the possibility of future spontaneous, catastrophic bleeding or radiation-induced bleeding resultant from clinical or subclinical proctitis, an ablative procedure was performed. A fluoroscopy-guided arteriogram and venogram were conducted to map the vascular malformation, revealing that the arterial portion was fed by a branch of the right internal iliac artery, but the venous portion was found to map to a branch of the inferior mesenteric vein (Fig. 2). The portal venous pressure was noted to be elevated at 16 mm Hg. Vascular ablation was completed during the same procedure with a combination of sodium tetradecyl (Sotradecol) sclerosis, followed by embolization with an ethylene vinyl alcohol copolymer dissolved in dimethyl sulfoxide (Onyx). Subsequently, MRI (Fig. 1E), CT (Fig. 1F), and a postembolization endoscopy verified a thrombosed rectal vascular malformation without signs of mucosal ischemia (Fig. 1G).
The patient was evaluated for possible causes of portal hypertension, including pre-, post-, and intrahepatic pathology testing. Laboratory tests included hepatitis serologies, human immunodeficiency virus testing, alanine and aspartate aminotransferase, gamma glutamyl transferase, bilirubin, haptoglobin, ceruloplasmin, rheumatoid factor, antinuclear antibody, antimitochondrial antibodies, and a full hematology panel, all of which showed unremarkable results. There was no history of significant ethanol ingestion. Imaging did not show any evidence of splenomegaly or vascular occlusion. An esophagogastroduodenoscopy did not show esophageal varices or other vascular abnormalities in the upper gastrointestinal (GI) tract. In summary, there was no identifiable cause for this vascular abnormality.
After successful ablation of the vascular malformation, the patient underwent salvage RT to a dose of 70.2 Gy in 39 daily fractions. Treatment was delivered concurrently with a 6-month course of androgen deprivation therapy. Representative images of the plan from within the region of the vascular malformation are included in Fig. 3. The patient did not require any treatment breaks and tolerated treatment as expected, experiencing a maximum of grade 1 GI and genitourinary adverse events that did not require management. The patient had 2 episodes of small volume (estimated < 2 mL) rectal bleeding between fractions 4 and 6, which resolved without management, and were consistent with episodes he had experienced before EBRT.
RT concluded in September 2019, and androgen deprivation therapy concluded in January 2020 with testosterone recovery by June 2020. At 32 months after EBRT, the patient remains in biochemical remission and free of rectal bleeding.

This research was supported by the Intramural Research Program of the National Institutes of Health.

Sources of support: Funding was provided by grant ZIA BC 011552, awarded by the National Institutes of Health Clinical Center for Research.

Data sharing statement: Research data are stored in an institutional repository, and will be shared upon request to the corresponding author.

Published by Elsevier Inc. on behalf of American Society for Radiation Oncology.