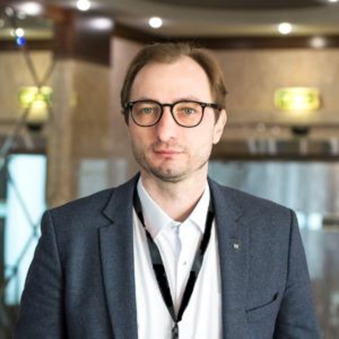 Andriy Beznosenko, a 39-year-old Chief Medical Officer of the National Cancer Institute (NCI) in Kyiv and the president of the Ukrainian Society of Clinical Oncology (Fig. 1), agreed to talk to Roman Kowalchuk and I about the dire situation for cancer care in Ukraine. He has been living in the National Cancer Institute building since the beginning of the Russian invasion of Ukraine. For the NCI staff, it is safer to stay in the hospital than staying home on their own, plus the early and frequent curfew hours do not let the hospital staff leave home (Fig. 2). Ukrainian men between the ages of 18 and 60 are not allowed to leave the country, so the NCI team consists mostly of male oncologists holding the front. “Our female staff should be protected from bombing and shelling; some of them evacuated to safer areas to stay with their families,” said Dr Beznosenko. Some doctors, such as Volodymyr Pikulskyi, an anesthesiologist at NCI, signed up to the Ukrainian territorial defense of Kyiv (Fig. 3) reminding “O! thus be it ever, when free-men shall stand between their loved home and the war's desolation,” by Francis Scott Key, The Star-Spangled Banner, 1814.
Since February 24, 2022, Russia has waged a full-scale invasion of Ukraine, conducting the war not only against Ukrainian soldiers, but also against Ukrainian civilians by attacking cities and civilian infrastructure with missiles, deliberately damaging and destroying hospitals and clinics in violation of the Article IV of Geneva Convention.
1

According to Ukraine's Minister of Health, Victor Lyashko, during the first month of war 246 hospitals sustained damages, 13 of which were rendered beyond repair; there were 60 instances of firing on ambulances.
2

The hospital infrastructure is damaged for years to come even if the war were to end today.
The war caused one-quarter of Ukraine's population (11 million) to be displaced, with around 4 million leaving Ukraine as of end of March 2022.
3

Encircled and isolated, the cities in southern and eastern Ukraine are taking the brunt of the assault. Mariupol, a port city of nearly 500,000 people had its residents cut-off from electricity, heat, Internet, water, and food for a month. According to the mayor of Mariupol, 90% of the civilian buildings were destroyed, around 5000 people have died in the city with 210 of them children.
4

Residents are trapped, melting snow to drink water, going for days without drinking and eating, without heat, medical care, connection to the world. This is a humanitarian catastrophe beyond imagination. And the whole world is watching.

Before the Russian invasion, according to unpublished Ukrainian NCI (Tumor Registry) data, an estimated 139,000 people were living with newly diagnosed cancer, and between 1000 and 1200 children were receiving active cancer treatment (AB, unpublished).
5
Resilience and perseverance under siege: providing cancer care during the invasion of Ukraine.
The Lancet. Oncology. 2022; 23: 579-583
The most common cancers in males are lung, prostate, colorectal, and oropharyngeal; the most common cancers in females are breast, colorectal, uterine, and cervical cancer.
6
Recent cancer incidence trends in Ukraine and short-term predictions to 2022.
Cancer Epidemiol. 2020; 65101663
Since the first days of invasion, patients with cancer in Ukraine experienced disruption in their cancer treatment and survivorship care.
To describe the current situation for oncology centers in Ukraine, one has to evaluate the heat map of the military activity. For the Ukrainian cities in the north, south, and east that are under fire (Chernihiv, Donetsk, Luhansk), the oncology hospitals are closed, the basements are used as bomb shelters for patients and the staff; for Russian occupied hospitals (Kherson), there is no connection to the Internet, and it is difficult to assess the situation on the ground. For hospitals in western Ukraine (Lviv, Ivano-Frankivsk, Rivne, Ternopil) with no fighting on the ground but frequent air-raids, the patient volume increased 3-fold, the wait times skyrocketed, and access to care is dire. From the data compiled and provided by the Ministry of Health of Ukraine and Dr Beznosenko, as of April 2, 2022, 89.3% of the national cancer centers in Ukraine were providing chemotherapy and surgical cancer treatments, respectively. Thirty-six percent of those providing surgical services were providing it in urgent setting only. As of March 6, only 57.1% of national cancer centers in Ukraine were able to provide the care for oncohematological patients, as of April 2, this number increased to 78.6%.
For the first couple of days of war, most the patients at the Ukrainian NCI in Kyiv were discharged, but many of them were not able to leave because their homes had been bombed or because they are from eastern Ukraine, which faces more violence. Bone marrow transplants were conducted in basements during the bombing and air-raid. Palliative care has continued throughout Kyiv and other cities due to extreme difficulties in evacuating fragile patients. At NCI, for the patients who remained in Kyiv the inpatient and outpatient chemotherapy, urgent surgery and palliative care continued (Fig. 4). For nonurgent care, NCI MD consults switched to virtual platform: phone, e-mail, social media platform (WhatsUp, Viber, Telegram). NCI's whole pediatric oncology ward was evacuated to Poland, France, Israel, and the United States. The patients who were not too frail to evacuate, were evacuated to either western Ukraine or Europe. Much of time was spent on sending the patient history documentation to the transfer treatment facilities. After Ukrainian army liberated the towns on the northwest of Kyiv, the NCI opened the in-patient wards on March 21.

Ukraine is classified by the International Atomic Energy Agency's Directory of Radiotherapy Centres as a low middle income country with level of availability 2.6 external beam radiation therapy (EBRT) machines per 1 million of population.
7

Per 2017 data, Ukraine has 58 radiation therapy centers with 80 Co-60 machines (76%) and 25 linear accelerators (24%) in use in the Ukrainian hospitals. These 125 EBRT machines cover only 65% of the needs of the Ukrainian population.
8
External beam radiotherapy facilities in Ukraine. Trends and challenges.
Probl Atomic Sci Technol. 2017; 112: 126-129
Among used Co-60 machines 35% of them require immediate replacement of Co-60 source with simultaneous procedural service for the further use, 16% machines are in use more than 30 years. Since 2014 Ukraine has lost control of more than 13 EBRT machines in occupied part of Donbass and 5 machines in Crimea (totally 17% of Ukrainian EBRT machines). Thus, the catastrophic shortage of the RT equipment in Ukraine is obvious.
With the start of the war on February 24, all Co-60 machines and brachytherapy practices were shut down due to the radiation safety concerns. To make the matter worse, the remaining linear accelerator potential remains uncertain as the maintenance of the older linear accelerator fleet is a challenge. In the beginning of April though, the Co-60 machines restarted operations in the areas not under shelling. As of April 2, 71.4% of national cancer centers were providing radiation therapy services. State Nuclear Regulatory Inspectorate of Ukraine has banned the export, import, transportation, and use of radiopharmaceuticals during the war. Therefore, nuclear medicine departments across the country do not conduct diagnostic or treatment procedures.
Dr Beznosenko was very hopeful to cut the ribbon for the brand-new Halcyon (Varian Medical System, Palo Alto, CA), machine was installed, but is not used clinically due to the Russia's invasion because of technical, legal and regulatory requirements cannot occur in normal fashion. Varian is facilitating the clinical launch of the Halcyon machine at NCI (Fig. 5).

How Can We Help?

“There is an acute need for chemotherapy medications and disposable medical devices. The supply chains became disrupted by the war, and the hospital is running out of medication,” said Dr Beznosenko. Many medical warehouses were destroyed or are unavailable due to logistical issues, 15 airports were destroyed, many bridges and highways damaged. For the centers in the western Ukraine, with the patient volume tripling, humanitarian help with medication, supplies, and staffing is needed to allow to meet the demands. Some humanitarian help is already on the way (Fig. 6). Roman Kowalchuk and Nataliya Kovalchuk collected the list of needed supplies and medications and are looking for donors and suppliers to help deliver them. Stanford Hospital donated $165,000 worth of medical supplies to Ukraine via Nova Ukraine foundation,
9

and Stanford students together with Nova Ukraine shipped $3.5 million worth of emergency care medical supplies to Ukraine. Mayo Clinic organized a matched donation fundraising. You can petition your institution for help for Ukraine.
Andriy Hrynkiv, a surgical oncologist at the Lviv Regional Cancer Center in his speech at the European Cancer Organization-American Society of Clinical Oncology (ASCO) meeting called for the developing a cancer support network for Ukrainian refugees. The European Cancer Organization and ASCO are urging cancer groups that are able to contribute services, resources, or contacts to join the network, which can be accessed here.
10

and St. Jude Children's Research Hospital is doing tremendous job with facilitating evacuations and triage of pediatric cancer patients on the ground in Ukraine.
12

The opportunities for visiting scholars should be given to the Ukrainian female oncologists who became the refugees so they can gain a valuable experience and bring it back to Ukraine when the war is over. ASCO and American Society for Radiation Oncology can collaborate on providing visiting scholarships for Ukrainian doctors.
Roman Kowalchuk., a radiation oncology resident at Mayo, has been very active at organizing a telemedicine solution for Ukrainian patients, in affiliation with MIM Software Inc (Cleveland, OH) and the Ukrainian Medical Association of North America,
13

We also call on radiation oncology vendors represented in Ukraine such as Varian, Electa, and Accuray to enhance their support, donate equipment and facilitate the radiation oncology equipment maintenance and service. One of the largest vendors in the radiation therapy market conducted €1 million matched fundraiser to donate to humanitarian needs for Ukraine.
Even if the war were to stop today, the long-lasting effect of the decimated health care system in Ukraine will last for years to come. We are almost 8 billion humanity that cannot stay silent while a peace-loving country is ruthlessly invaded and torn apart. Let us help the Ukrainian doctors-heroes to battle cancer together.

Sources of support: This work had no specific funding.

Disclosures: The authors declare that they have no known competing financial interests or personal relationships that could have appeared to influence the work reported in this paper.

© 2022 The Author(s). Published by Elsevier Inc. on behalf of American Society for Radiation Oncology.